We are please to announce the launch of PoroMan TV & Radio. Christian television for all of Papua New Guinea. Using innovative internet TV technology, local live broadcast locations, and a soon to be completed TV studio in Port Moresby.  PoroMan TV is providing safe, Christian entertainment, teaching, preaching, music, cartoons and more. Content is provided in both Tok Pisen and English with more “Place Tok”, local languages coming. Click on the image below to experience PoroMan TV or Radio. 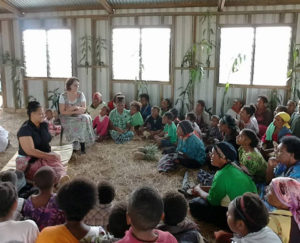 While sharing the importance of daily Bible Reading with a group of Papua New Guinea ladies I paused to ask how many had a Bible. I was startled to see that out of approximately 50 ladies, twenty-nine said they had no Bible. There is a great need for these women to read the Bible for themselves. False doctrines abound and there is a need to know the truth that they can see for themselves. Many of them live lives that are difficult and have little emotional support. The spiritual comfort they can receive from God’s word is so vital to their lives.

Right now in Papua New Guinea it is rainy season. Because of this I have selected a Bible in Tok Pisin that has a zippered vinyl cover which will protect the Bible. The English Bible that is available is NKJV and has many songs and hymns included.

If you would like to donate to this worthy cause it would be much appreciated! I am sure we will meet other women who need a Bible. Please prayerfully consider this great need.

The work of EBM in Papua New Guinea was started in 1948 when the EBM founder, G.T.Bustin pioneered a work deep into the highlands of primitive New Guinea among stone-age warriors. They welcomed him with open arms and hearts. He took reports of the warm response he received back to the United States and recruited missionary personnel and funds. Eventually seven main mission stations were established with churches, schools and medical clinics.

These Mission Stations became like little towns with residences, schools, a medical clinic, church and even an airport for missionary airplanes to bring in supplies and evacuate medical emergencies.

In 1974 EBM missionaries began to work closely with national leaders to help incorporate a national church under national leadership. The Church was named, Papua New Guinea Bible Church.In 1980 EBM and PNG Bible Church began a strong effort to plant churches throughout all the cities and major towns of Papua New Guinea. These successful efforts have resulted in the growth of the church to over 500 local churches, 15 Christian schools, and two Bible Colleges.

In the 1990’s a license to establish a Christian Radio Station was granted by the Fiji Government to Evangelical Bible Mission. For the last three years this radio station has been in operation broadcasting the Gospel twenty-four hours every day.

In the late 1990’s the Papua New Guinea Bible Church began a church planting effort across the border into Irian Jaya (Indonesia). Applications have been made to register the Bible Church of Indonesia and expand the efforts that have been made in that country.

In the Southern Highlands seen here became the home of more than 300 students right out of the jungle. Over time, thousands of children were given a good education and learned to know Jesus through the ministries of EBM misssionaries.
Lenita Bustin spent 39 years teaching at Kauapena until she died in 1997 and was buried there.
Among the children Lenita taught in just one class (the class of 1963) her students went on to become: 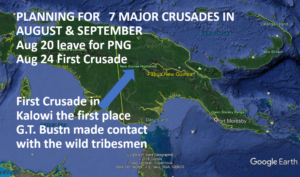 The Apostle Paul wrote that “a great door and effectual was opened to him but there were many adversaries.”

I could write the same thing! This year we are faced with the opportunity of touching a whole nation of 8,000,000 (eight million) people— the nation of Papua New Guinea. The national media has already been contacted and are on board to help us spread the word.

You see, on August 24th will make exactly 70 years since my father, G.T.Bustin landed in the “Stone-age” country—New Guinea— for the purpose of reaching wild tribes with the Gospel of Jesus Christ.

Seventy years ago, he planted a ministry that has literally been the “Salt and Light” to the nation. Over 600 churches have been planted and thousands of children and young people have been given a chance for an education that included coming to know Jesus. Many of them have become spiritual and government leaders of the nation.

Now we have the opportunity to build on those 70 years by some major nation-wide 70th Anniversary celebrations involving evangelistic campaigns in major cities and towns backed up by radio and television and national newspapers.
Already crews in various locations are organizing and planning these crusades. A message I received from Gideon today says they are planning on starting off with services under a large tent at the very exact place where my father first made contact with the wild warriors.

Gideon’s father’s name was Kandulopi. Kandulopi was a young man standing with his father in the line of warriors ready with their spears and bows and arrows and stone axes when my father approached the group with his arms wide open to give them a hug of friendship.

This strange white man then told them about the God who loves them and sent His own Son to come to show us a way to God. The people excitedly received the missionary and Kandulopi became one of the first converts — then went on to become a native pastor who preached the Gospel to his people for more than 40 years!

Now his son, Gideon, is our National EBM Leader in Papua New Guinea and he wrote that they are planning on a drama that re-enacts the moment of first contact with the missionary—the first white man they had ever seen. This will be video taped and eventually made available for people all over the nation to see.

We are looking at possibly as many as 7 different gospel crusades in strategic villages and some of the major cities of the country. Thousands will be preached to in person and millions will hear about it on the major national media.

Do I dare say that maybe the open door we are faced with is even greater than the one the Apostle Paul wrote about? It could be because Papua New Guinea is also connected by land and sea to Indonesia, which is the largest Muslim-majority nation in the world with 240 million people.

And we are already involved in sending national missionaries from Papua New Guinea to Indonesia and this should only be escalated by these crusades when young Christian men and women are challenged to become young “G.T.Bustins” and pioneer mission works deep into the heart of this huge Muslim country! Talk about an “Huge Open Door”!!!
What about “adversaries?” Well there are those too!

We are running out of time to get all the plans put together. Tentative plans are for our team to leave on August 20th so we will be in Papua New Guinea to begin celebrations on the exact day that my father arrived (August 24th) seventy years ago. We need to book our flights and buy our tickets right away.

Another “adversary” is the need for funding for these crusades. Christians in Papua New Guinea are raising money to assist but we also must help carry the load of the expenses involved. Besides buying tickets for our airfare to and from Papua New Guinea, we must cover the costs of internal travel and accommodation within the country. We also need to help pay for the rental of the large gospel tents, powerful sound systems and forums for the events.

Altogether  we need to raise $35,000 immediately  to move forward with our plans to impact the nation of Papua New Guinea during these 70th anniversary celebrations.

In the past I have preached for crusades ranging in attendance from several hundreds to 25,000 people. We have had thousands come forward to surrender their lives to Jesus Christ. We have also had hundreds come forward to offer themselves to go as missionaries.

I believe these events we are planning for the 70th anniversary will go beyond anything we have experienced before, and I need you to be partner with us in walking through these open doors.