In 1945 EBM founder, G.T. Bustin had a dream that he was in Haiti and saw a property that could be bought as a campus for a Bible School. He went to Haiti and found the property of his dream and eventually moved his family to Haiti along with other missionaries he had recruited. The Bible school was started and national pastors were trained and many churches started.

Radio Victory” station has been on the air since July, 2004 spreading the gospel to the people of Haiti.

Here is a photo of David Bustin with two converted Witchdoctors listening to Christian Radio Station 4VBM with it’s tower on the mountain behind David’s house. These two witchdoctors have been saved during the past two years and are now reaching out to others. The man on the right nearly killed the one on the left during a Voodoo ceremony and actually was responsible for the man on the left losing one of his eyes. Today they are united in Christ! 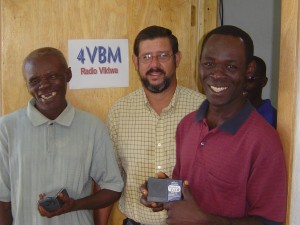 Youth Ministry: In many of the countries of the Southern Region the youth population is very high. Estimates are that eighty-five to ninety percent of the population are young people. Drugs, immorality, and diseases are rampant; many suffer from AIDS. It is imperative that we have a strong program directed towards this large population of young people; such a program must focus on the physical and social needs as well as the spiritual needs of the youth.

Radio: Our motto in Haiti is “The Gospel in Every Home”. Through partnership with Oriental Missionary Society (OMS) and Radio 4VEH , our goal is to begin a radio ministry in the Dye-Mon district. We will also cooperate with OMS and Radio 4VEH to place a pre-tuned radio in every Haitian home so that each home can receive the broadcast.