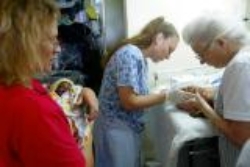 Pat and Melinda Smith facing the wrath of the storm and working to keep their orphans in Haiti safe. To make a donation to support them at this time, click on the donate. Thanks!

At 8:00 in the morning on June 30th, Lori came running up the stairs and breathlessly announced that there was a very sick little boy on our porch. I immediately followed her down the steps and my eyes fell on a child on the brink of death. His eyes were fixed, he was completely pale and jaundiced (yellow) and he didn’t look like he had any life left in him. I didn’t even stop to ask questions, just scooped him up and hollered for my mom to follow me. We laid this poor little fellow on the warming table, put oxygen on him and I started looking for a vein to put in an IV.

I have never, ever in all my years here, seen a child so free of veins as this one was. I knew that he was probably very anemic and I knew time was running out for him so I poked his heel and got some blood to send to the local lab. My orders were to get blood ready if hemoglobin was below 7 (normal is 12-16). About an hour later the results came back. The lab tech sent someone running with a form from the Red Cross. The child’s hemoglobin was 2, yes I did say 2, and death was very near.

In the meantime I had continued to look for an IV site to no avail. With no other options in view, I decided to use a technique I had learned from an elderly anesthesiologist, a technique that is now used only in veterinary medicine, called clysis. Clysis is intentionally running IV fluid under the skin on the child’s back. It can be risky if run too close to the spine as it can cause meningitis but in this case, I felt I had no other options. For ten hours, we ran clysis and I kept looking for veins almost that whole time. Finally, at 6 PM a vein appeared, the Lord guided my hand and an IV was started. Immediately we began the blood transfusion and within a couple of hours we were looking at a new boy!

God has continued to touch Carlos and he’s doing well. Unfortunately, he does have some neurological damage due to the severe anemia and the lack of oxygen it caused. Please keep Carlos in your prayers as we are trusting God for complete healing.

At 10:00 AM, as we worked on Carlos, someone came upstairs again and announced that another child had arrived in desperate condition. My mom and Lori went to investigate as I continued to work on Carlos. They both came upstairs in tears with this little dried up, pale, dirty little boy wrapped in a dirty towel. His hair was orange from malnutrition, his skin was peeling off from head to toe and he was so very dirty. He was groaning constantly and sucked his little fingers as if his life depended on it. They took him and washed him up and gave him a hair cut and I told them what to do for him as I observed him from across the room where I continued to work.

Around 1:00 PM, I felt that Carlos was as stable as I was able to make him for the time being, so I went to put an IV in the new boy, Steeven. He was an easy one to start an IV on, so it didn’t take long, but as I observed him up close, I realized that his was not a simple case of malnutrition. Something else was going on with this one but I had to get back to Carlos, so I told my mom and Lori to take care of Steeven til I could get back to him. At 6:30, that chance finally came. They brought Steeven to me so I could watch Carlos with his blood transfusion while assessing Steeven more closely. I worked for over an hour massaging his skin with a lotion-moistened gauze to get the loose, dead skin off so I could see what was underneath.

As I worked that evening and the next morning I saw singed hair on his arms and legs. Immediately I suspected that this child had been at the witchdoctors house, as many of their rituals include harsh chemicals (thus all the dead skin and singed hair). They also have rituals that include tossing a child over a huge bonfire from person to person to appease the evil spirits that are perceived to be persecuting the child and causing the illness.

All of this, while appearing to be abuse to us, is thought to be a way of healing by those who practice it. The next morning I had one of our friends approach Steeven’s father about it, and sure enough, he had been enduring trips to the witchdoctor for 13 months. He was 16 months old at the time he arrived at our house and when his father gave us Steeven’s vaccination record, we saw that he weighed the same as he had at 1 month old! He tipped the scales at 9 pounds and 3 ounces! This poor little guy had not only been malnourished but what horrors he must have endured for those 13 months!

Steeven has a long uphill road ahead both physically and psychologically. When he first came, we couldn’t even give him a nebulized respiratory treatment that he needed because the sound caused him so much distress. He is very easily scared and it takes a long time for him to trust anyone. Please keep Steeven in your prayers as the parents have not given us custody and may try to take him back home. So far, the social welfare department here is not willing to intervene for him, and we don’t want him to have to go back to that type of situation. Please remember Steeven, not only for healing, but for deliverance from that kind of life.